8 Electric Truck Companies to Watch in 2020

Electric trucks are becoming popular worldwide. Offering a cheaper alternative to traditional heavy-duty vehicles, they have very high efficiency of electric powertrains, which result in much lower running costs.

Because of the foreseen high demand for hybrid and fully electric vehicles, many companies are establishing or fortifying their territories in the electric truck market and developing electric trucks in all shapes and sizes—delivery truck, dump truck, milk truck, semi-truck, and box truck.

Here are eight of the most promising electric truck companies that we should keep an eye on:

The company will focus on small to medium-sized commercial vehicles, such as the 10t rigid truck that can travel up to 200km before needing an overnight charge. SEA’s electric system has a charge time of around 7 hours, which suits transport operators with several local, set routes with dedicated overnight layovers.

SEA Electric is a recipient of a $516,720 grant from the New Energy Jobs Fund grant, which aims to support high growth and high-value industries, including the new energy technologies sector, which the Victorian government believes are critical to securing the state’s future.

“SEA’s vision is that every commercial vehicle in the world, that travels less than 200km per day (and has a minimum 4-hour dwell time per 24 hour period) has a zero-emission – 100% electric drive in the future. This transposes to most of the 350 million commercial vehicles in operation across the globe. Furthermore, SEA intends to lead the establishment and growth of this new sector for the Australian economy, and expects to see Australia become recognised as a leader in electric vehicle technology.”

The German automaker best known for its Mercedes-Benz brand and for being the largest truck maker in the world has recently launched its all-electric 18-wheeler truck: the Freightliner eCascadia. With a 550-kilowatt-hour battery pack that provides 80% charge in 90 minutes and a 250-mile range on a single charge, the big rig is designed for regional transportation and port service.

The company also has other all-electric models, such as an all-electric box truck for urban deliveries and the Freightliner eM2 106 that has a 325-kWh battery pack that can be recharged to 80 per cent in 60 minutes and offers a 230-mile range, which is ideal for more local distribution and deliveries.

Daimler Australia is based in Mulgrave, Melbourne.

Another truck manufacturing giant, Volvo Trucks has developed a zero-emission truck called the VNR Electric that is reportedly set for commercial production and sales in late 2020. The model is part of Volvo's broader Low-Impact Green Heavy Transport Solutions (LIGHTS) initiative with California’s South Coast Air Quality Management District (SCAQMD) in the US.

Partly funded by the California Air Resources Board, the $90 million pilot program is part of California Climate Investments, a statewide initiative that funnels billions of Cap-and-Trade dollars toward reducing greenhouse gas emissions and improving public health.

While Volvo has yet to announce the VNR Electric’s range and prices, the company plans to offer month-to-month lease agreements that will include insurance and maintenance. It will also lease out charging installation and necessary infrastructure improvements for its trucks.

Highly popular electric automotive company Tesla has been recognised for its all-electric cars. Late last year, it made more headlines after launching the Cybertruck, an all-electric, battery-powered, light commercial vehicle with futuristic (or at least deviant) body design.

Three concept models have been announced for the Cybertruck, with range estimates of 250–500 miles and an estimated 0–60 mph time of 2.9–6.5 seconds. Its production, however, was slated to begin in 2021. As of April 2020, the company claimed that around 600,000 people have preordered the vehicle.

Tesla first ventured into trucks in 2017 with the unveiling of the Tesla Semi, an all-electric battery-powered Class 8 semi-truck/tractor. The vehicle boasted up to 500 miles of range with a full load and beating diesel-powered trucks in the cost of operation, which should be around $1.26 per mile. While two concept models for the Tesla Semi were unveiled that year, the limited production was pushed to the near end of 2020.

But while no commercially produced Cybertruck or Tesla Semi has actually been seen on the road, the world can only anticipate what’s next in store from the company. 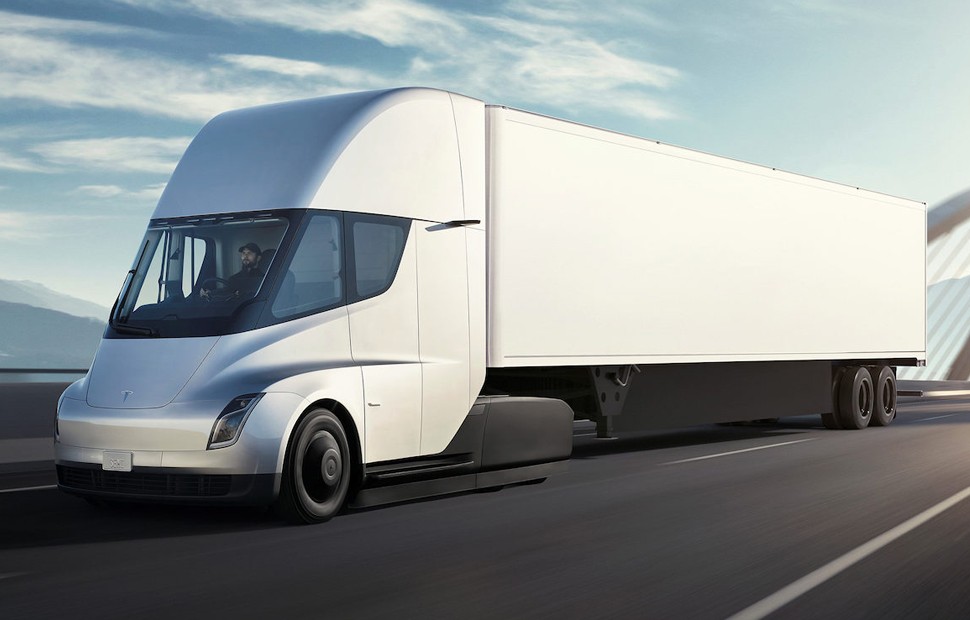 The Phoenix-based startup that got the naming rights to Tesla’s first name has created different semi-trucks for different parts of the world: Nikola One and Nikola Two for North American and Nikola Tre for Asia, Australia and Europe. Available with either fully electric or hydrogen fuel cell electric capabilities, all models have anticipated ranges between 500 and 700 miles.

Nikola Motors has big plans for the future. Full production of its semis is set in 2021. It reportedly has orders to lease 14,000 of its heavy-duty vehicles and aims to have all pre-ordered vehicles on the road by 2028. Compared to a Tesla Semi, Nikola’s hydrogen fuel-cell trucks don’t require heavy lithium batteries, which makes them about 5,000 pounds lighter.

It also plans to build a coast-to-coast network of 700 hydrogen stations across the United States by 2028 to refuel the hydrogen-powered heavy trucks that it plans to develop. The company says to use electricity from renewable energy sources such as wind and solar to extract hydrogen fuel from water in each refuelling station. Additionally, invites giant EV makers like Daimler, General Motors, and Toyota to use its fueling stations to expand their own hydrogen fuel cell vehicle sales outside of California.

The Michigan-based automotive startup made headlines when Amazon (which happened to be one of its investors) announced its plan to purchase 100,000 all-electric delivery trucks from the company to reach its 2040 net-zero carbon goal.

For Rivian, the order would prove to be a challenge. For one, the company has yet to produce an EV for the masses and is still in the final stages of testing its electric pickup truck, the R1T. The full-scale production is set to begin this year. 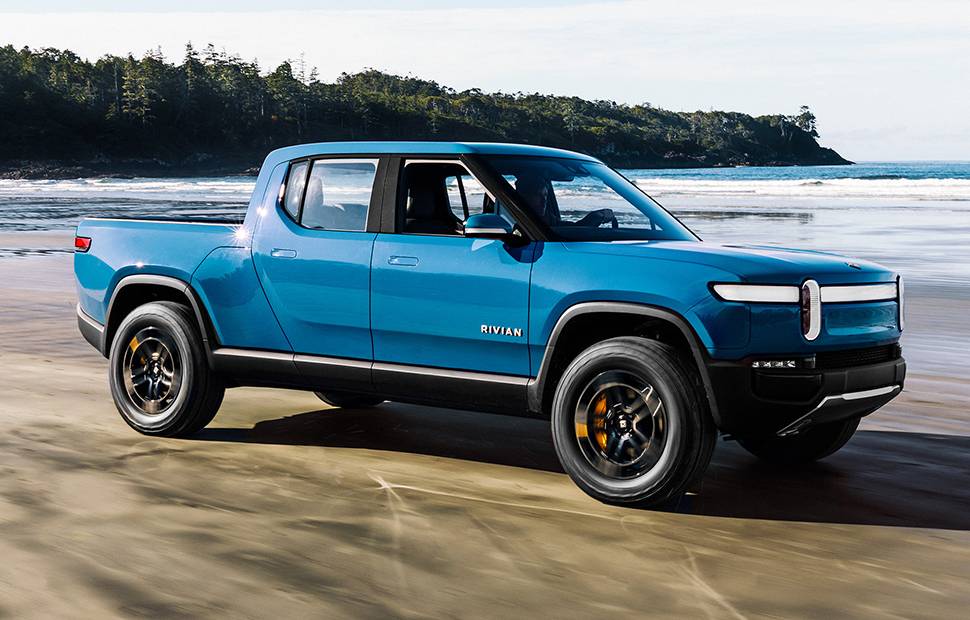 The company has made headlines when the United States Postal Service (USPS) announced its plan to purchase 186,000 new mail trucks over the next five to seven years under an estimated $6.3 billion contract. Workhorse was one of the six companies that competed for the USPS contract.

Although prohibited in their contracts to publicly comment on their prototypes, it was reported that two contenders are fully electric and at least one of the other two is a hybrid model.

On the other hand, Workhorse has a lot to prove should it be awarded all or some of the USPS contract, considering its lack of experience in mass vehicle production.

Headquartered in Shenzhen, China, with offices and an assembly factory in Lancaster, California, BYD focuses mainly on the short-haul goods movement sector, primarily in America’s ports, rail yards and freight-handling facilities instead.

The company is the world’s largest electric car maker in terms of the volume of EVs sold including buses, forklifts, cars and rail systems. These include the long-range battery-electric Class 8 Day Cab, which has a range of 125 miles and a top speed of 65 miles per hour. The vehicles battery packs can recharge in as little as two hours with a high-speed direct current system or about 14 hours with a standard 240-volt charging system.

BYD has also manufactured a Class 6 truck, a terminal tractor, and two models of all-electric refuse trucks. While the majority of its growth continues to come from its electric bus sales, its sales for medium- and heavy-duty electric trucks are increasing in the US. 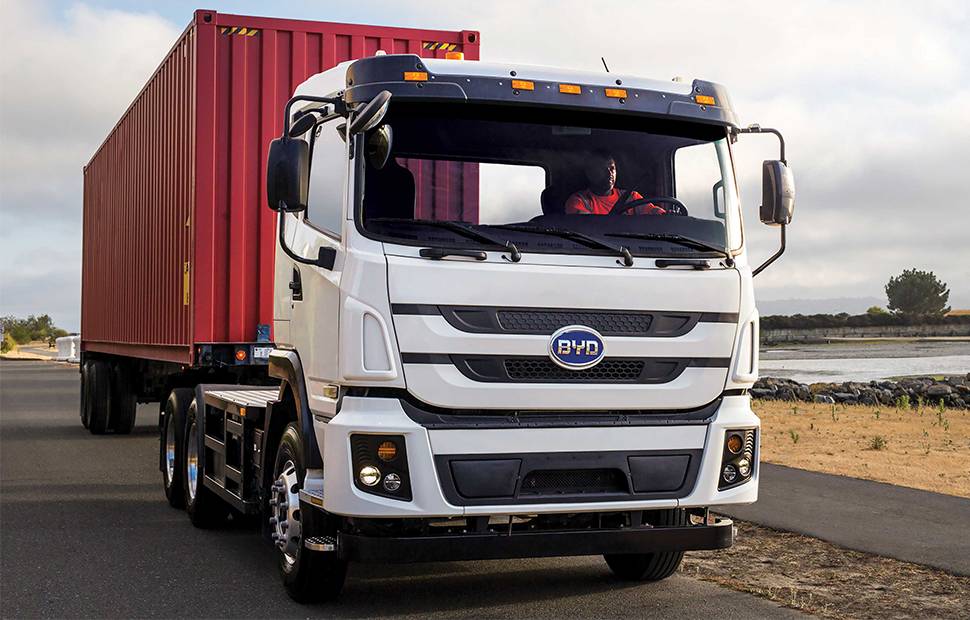 Need a truck loan? Call Positive Lending Solutions today at 1300 722 210 or fill out the online Loan Pre-Approval from now!