Ready or not, Australia’s most popular vehicle type, the ute, is going electric. Both startup companies and established car brands are eager to show off their EV concept, which is expected to revolutionise the country's automotive industry.

Before you apply for a car loan and get too excited, here are ten of the most popular and highly anticipated electric utes in Oz today.

Proudly engineered in Adelaide, this electric ute from South Australian company Zero Automotive is actually a Toyota LandCruiser 79 Series that has been converted to battery power. It is the country’s first engineered EV for use in mining and agribusiness amid the industries’ growing demand for zero-emission vehicles. 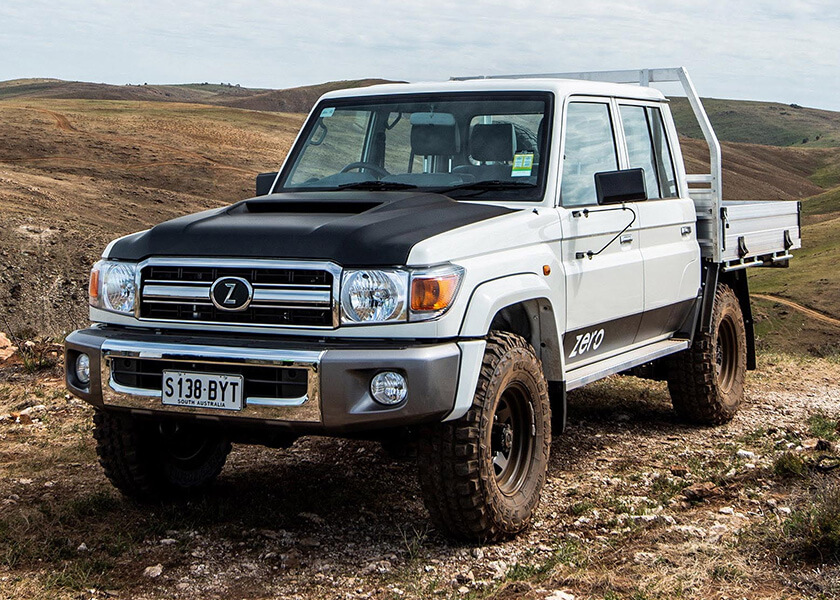 Fully electric, ZED70 is available in the wagon, dual cab, single cab, and troop carrier configurations. It has regenerative braking, high voltage air conditioning and heating. It also promises a range of up to 350 kilometres.

“It’s available in 20 to 120-kilowatt hour battery packs, with modular battery packs in it, and has a 700 Newton meter electric motor in it. That has more torque than the factory turbodiesel V8 that’s normally found in this Landcruiser 79 series platform,” said Tim Possingham, the ute’s developer who also runs Adelaide Motorsport Festival and Adelaide Rally.

Selling for less than $200,000, ZED70 is already compliant to Australian design rules and is legal to run on Aussie roads. It is, however, not intended for mass-producing and mainly available to the country’s mining, agribusiness, or local and state governmental agencies.

The first 100% electric light vehicle for underground mining in the country and in Australasia, e-Cruiser is another EV that uses the heavy-duty frame and drivetrain of Toyota ute. This time, it’s the venerable LandCruiser 70 Series that’s been replaced with an electric engine by South Australian company Voltra. 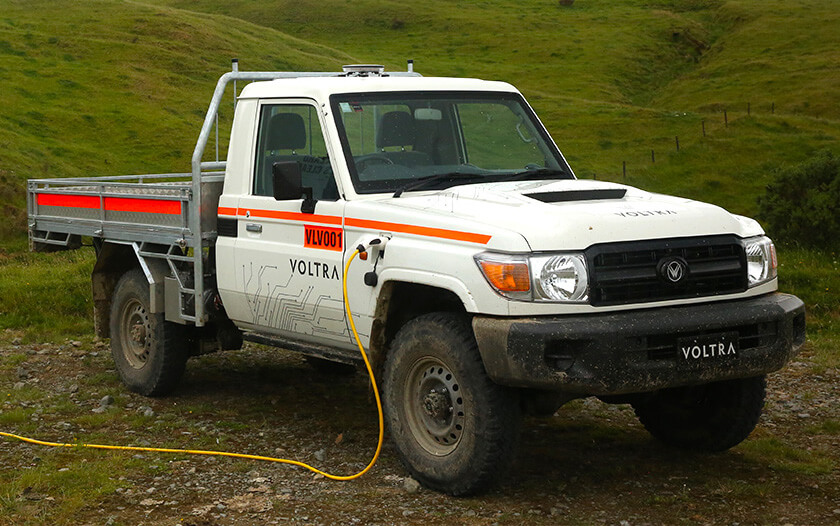 Purpose-built for underground and open-cut mining, the e-Cruiser produces zero harmful emissions yet more torque from its electric engine. It produces 66 kW of continuous power with peak power at 104 kW and 106 Nm of continuous torque with peak torque at 256 Nm.

The e-Cruiser’s onboard charger is 6.6 kW single phase. It requires a 240-volt single-phase, 32 A socket. Using only the onboard charger, it will take around 5.5 hours to recharge the ute with a 20% state of charge. With a 50 kW DC fast charger, however, it will take around 40 minutes to recharge the ute with 20% battery power.

Yet another Australian mining-engineered electric ute that hopes to significantly reduce the industry’s energy usage and vehicle emissions is the heavy-duty Bortana EV. 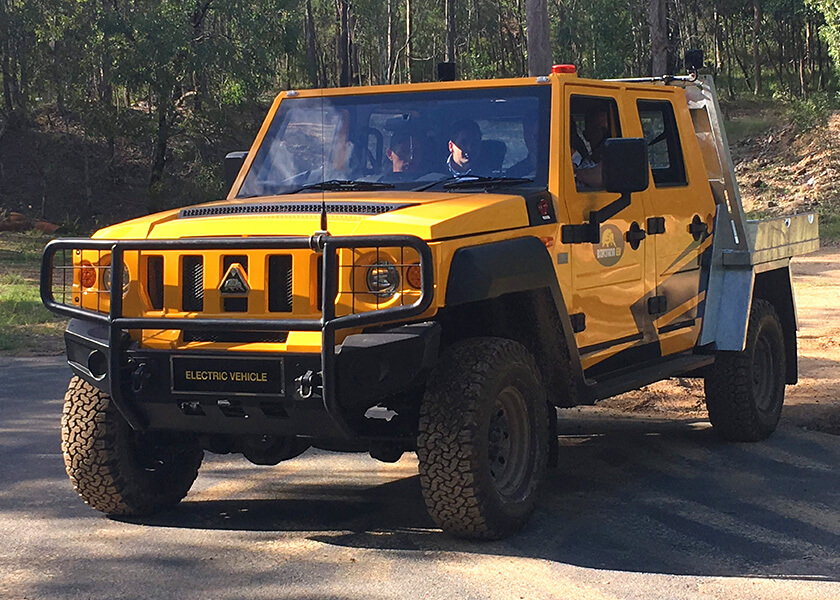 Comparatively a “light” vehicle compared to most heavy loaders and massive trucks in mining, Bortana EV ditches the powerful 110kW/360Nm Cummins ISF 2.8-litre turbo-diesel and five-speed manual transmission with two-speed transfer case engine for an electric motor and a lithium-ion battery pack. It will have a 150km range, with a 50kWh battery, 135kW output motor and 320Nm torque.

ACE Yewt is a homegrown electric Aussie ute. Unlike the three above mentioned EVs that are designed for the country’s mining industry, the Yewt is a tiny single-cab that’s ideal for urban entrepreneurs and service providers who want to save on their car’s running costs. 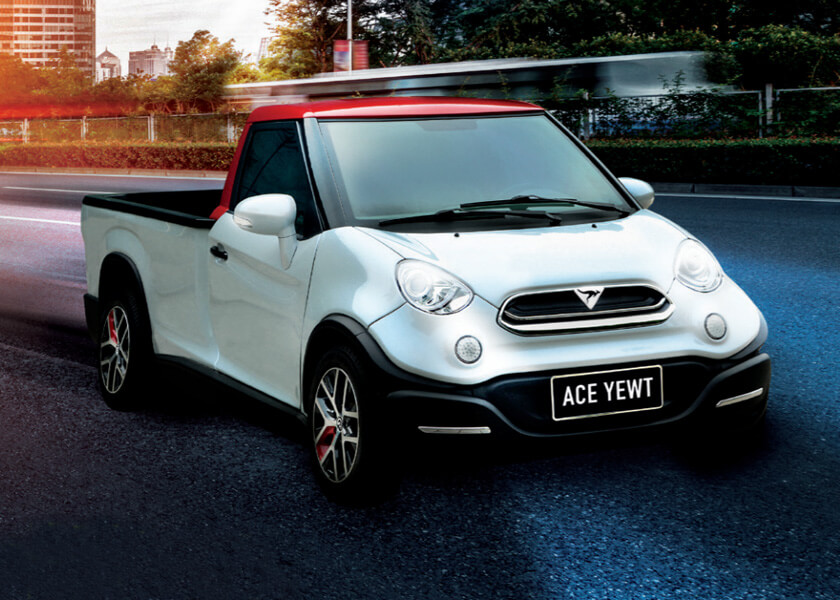 Yewt claims to lower fleet greenhouse emissions by over 70% and running costs by up to 85%.

The car has a 150 to 200-kilometre drive range on one charge at partial load. Its maximum home charging period is 8 hours.

As of today, the production for the “cute” ute is ongoing. However, it can be pre-ordered for a promotional price of $199 instead of $480 for the first 30 orders.

This deviant-looking ute from the American company Tesla has been teasing EV enthusiasts since 2017 although it is still set for launch in 2022. 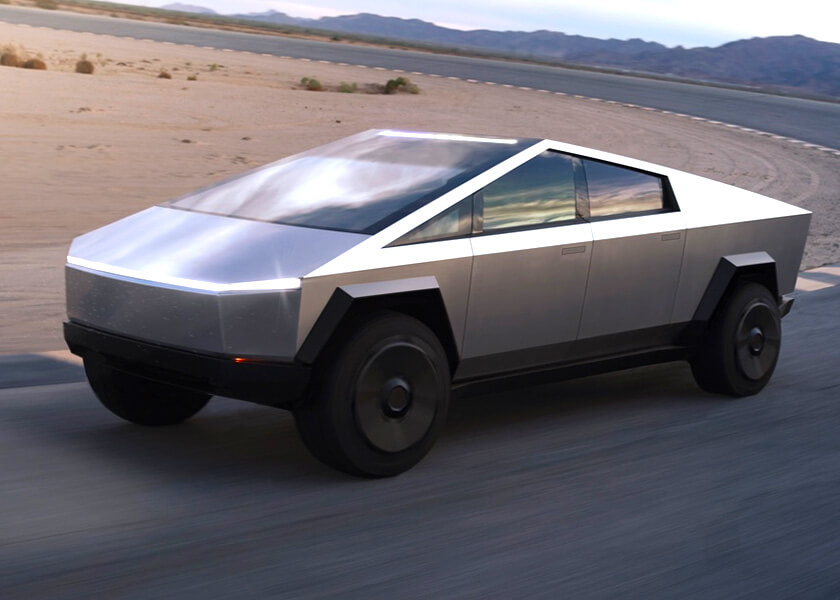 Powered by a 9.9V rechargeable battery that can give a driving range of around 600 to 700 km on a single charge, there’s more to the car that adds to the hype.

However, the company says that the EV’s configurations are US-specification only and will only develop global specifications at a later date based on demand.

Aussies who are eager to own the Cybertruck and do not mind waiting for a year or two can pay a reservation fee of $150 on Tesla’s Australian site. Be aware, however, that the company owner Elon Musk stated in early August that the company does not intend to sell the car outside of North America. Should this become the case, the deposit is, thankfully, refundable.

Other anticipated EVs that are expected to arrive in Australia include: 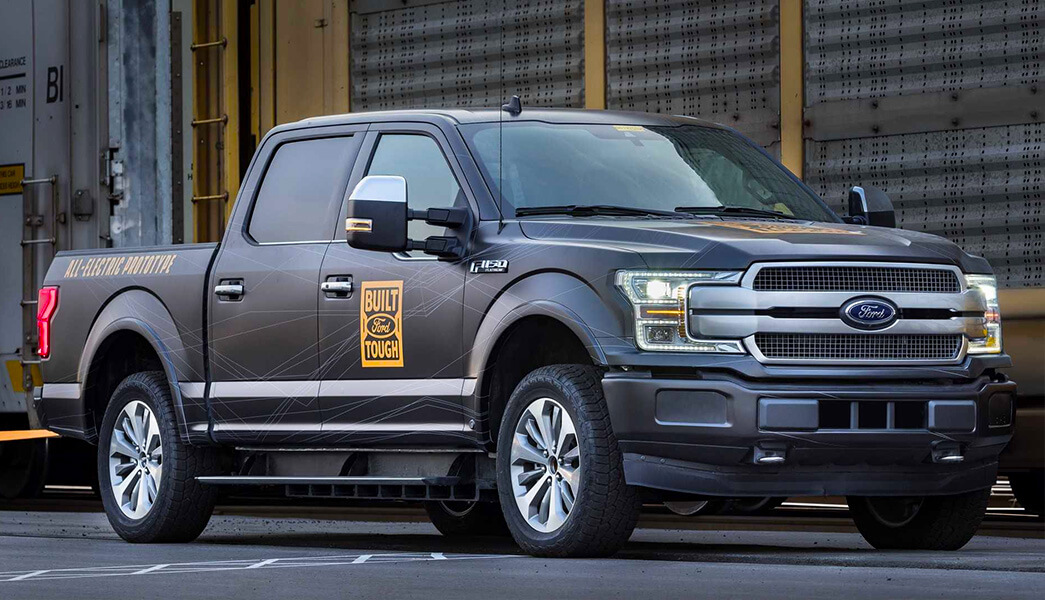 Not to be outshined by EV start-up companies like Rivian, American company Ford has confirmed at the 2019 Detroit Auto Show the development of a pure-electric version of Ford F-150, its top-selling workhorse.

The F-150 EV will follow a redesigned version of the newly unveiled F-150 MY2020. In a teaser video released in July, a prototype model was towing a 450-tonne train. The company, however, did not give details on what powered the ute. 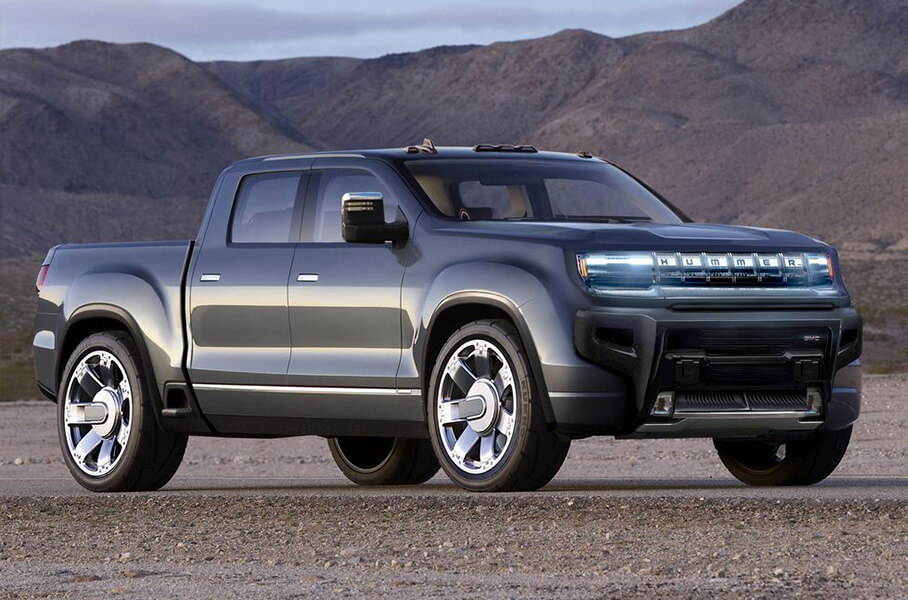 Claiming to be the world’s first all-electric super truck, the GMC Hummer EV is set for its global launch in 2021 and could eventually be sold in Australia under the GMSV brand.

Under the hood, it is fitted with a new Ultium lithium-ion battery ranging from 50 kWh to a whopping 200 kWh and single-, dual- and triple-motor powertrains pumping out up to 750 kW of power and 11,500lb-ft of torque. 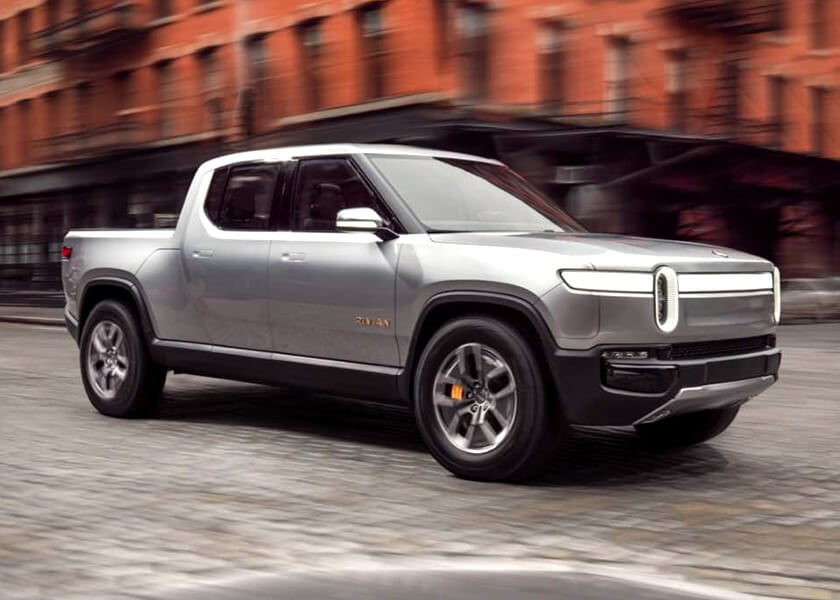 American EV start-up company Rivian has not confirmed an exact timeline for deliveries in Oz of its R1T dual-cab ute but has stated that the EV is intended for release in right-hand drive markets. 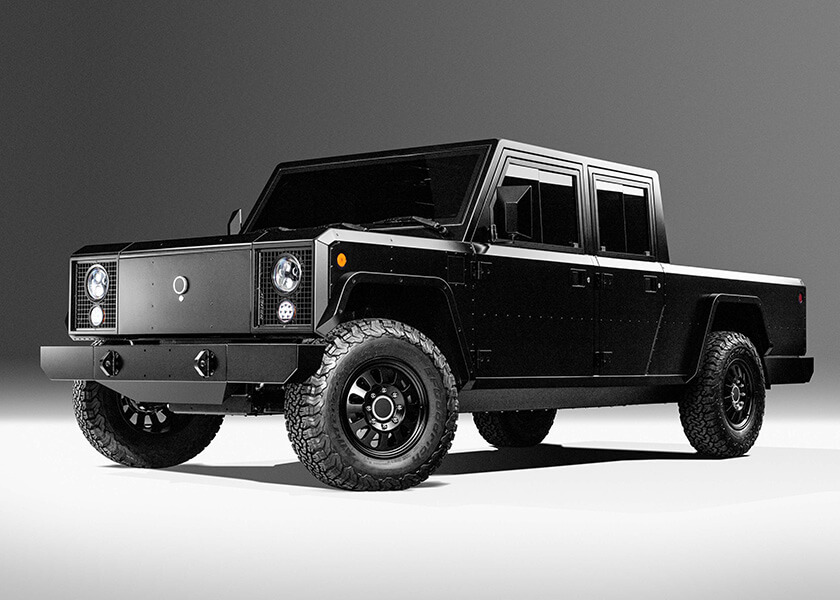 Based on the Toyota Land Rover Defender, the Bollinger B2 from Michigan-based car-maker Bollinger is expected to be launched in 2021.

However, the company has yet to confirm right-hand drive production for the ute. 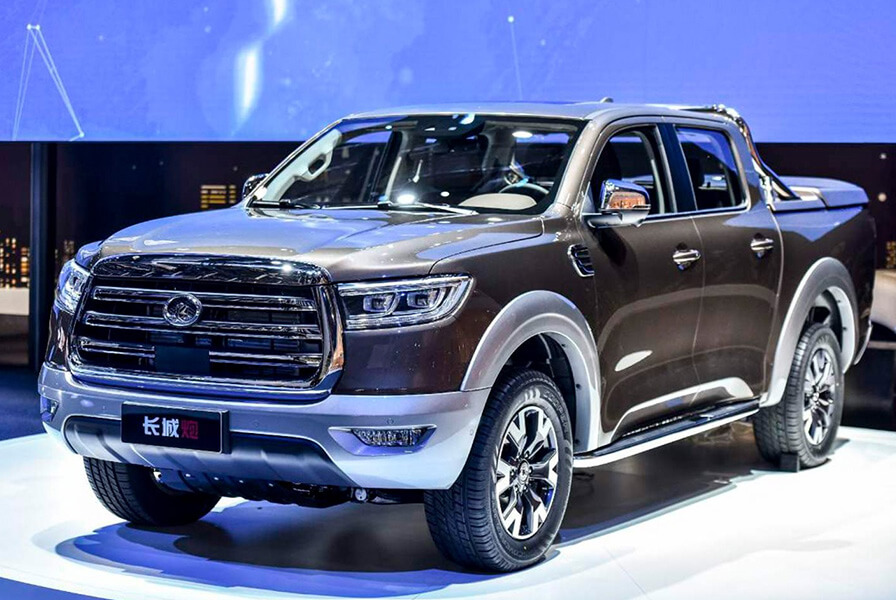 An electric-powered option for the Chinese-made ute was unveiled at a Shanghai show earlier this year. Aside from a 500-kilometre drive range, pricing and local on-sale date for the car have not been announced. Nonetheless, the company has said that the EV will both be sold in pure-electric and FCEV forms in the country by 2023.

Are you ready to get on the road with an electric UTE?

Here at Positive Lending Solutions, we can help you get your car loan approved for your dream electric ute fast. Talk to us or get a free quick quote to know your options.