Can You Get an Electric Car Loan?

A KPMG survey of 800 executives in 38 countries working for car manufacturers, suppliers, dealers and finance providers revealed that 90% of bosses believe that electric cars will dominate the market in 2015.

Electric cars are extremely popular in Europe, especially in Norway, where nearly 1 in 3 new cars registered is an EV, and the government have a program to phase out fossil-fueled vehicles by 2025.

So why is Australia falling behind?

It's partly due to the government legislation passed in 1989 to protect the now non-existent Australian car manufacturing industry which prohibits the direct import of certain makes and models of cars.

This will all change in 2018 with the introduction of new laws allowing personal imports and reductions of customs tariffs.

If you're sick of changing the oil, filling up with petrol, and driving a car that's expensive to maintain, with hundreds of parts that can break - an electric car may be just what you are looking for.

You can even get a car loan to buy a new or second-hand electric car, and use the money you'll save on fuel and repairs towards loan payments.

Why Buy An Electric Car?

An electric car motor has only 20 moving parts, compared to more than 2,000 parts that make up an internal combustion engine (ICE) of a regular car.

The electricity costs for an electric car are just a fraction of what you'll pay for fuel to travel the same distance.

Plus, unlike a petrol car, regularly released software updates mean that your electric car will only get better over time as the technology improves.

Right now electric cars are still very expensive, but it's been predicted that by 2020 a brand new electric car will cost you just $30, 000. That's under the current median price of $33, 000 you'll pay for a combustion engine car right now.

Where can you 'fill-up' your EV?

As electric cars have become more popular, hotels, caravan parks, shopping centres and cafes have begun to offer free charging as an additional reason to spend time there. There's even an electric car charging point at the Positive Group head office in Adelaide.

In Western Australia, seven councils in the South West are building Australia's first 'electric highway'. The RAC is funding 50-kilowatt charging stations from Perth to Augusta, including the popular tourist destination Margaret River, where you can recharge in about 30 minutes.

Looking after your electric car - save $ at the mechanic

To keep your electric car in top condition, all you need to do is check the brakes once a year, and rotate the tyres every 20,000km.

With few moving parts, there's no coolant, oil changes, spark plugs, fan belt or transmission failure to be concerned about.

Your total annual electric car maintenance will cost you no more than a third of what it costs to maintain a petrol car.

To spell it out in detail, here's a side-by-side comparison of the annual costs of an electric and an internal combustion engine car:

To truly get a feel for the costs of running an electric car instead of a fossil fuel car, let's take a ride with Sally over 12 months and compare how much she'll spend whether she's driving an EV or a petrol car.

What if Sally drives an Electric Car instead?

Check out these reviews by Nissan Leaf owners, and if you're after something upmarket, here's a review from a Tesla driver (he'd originally planned to buy a Ferrari).

Driving perks of an electric car:

The most expensive part of an electric car is the battery, which means that so far electric car prices have remained prohibitively high for most Australians, but this is on track to change in the next 4 years.

This graph shows the dramatic drop in battery prices. Once this cost reaches $150 per kilowatt-hour, the purchase of an electric car will be cost-competitive with petrol vehicles. 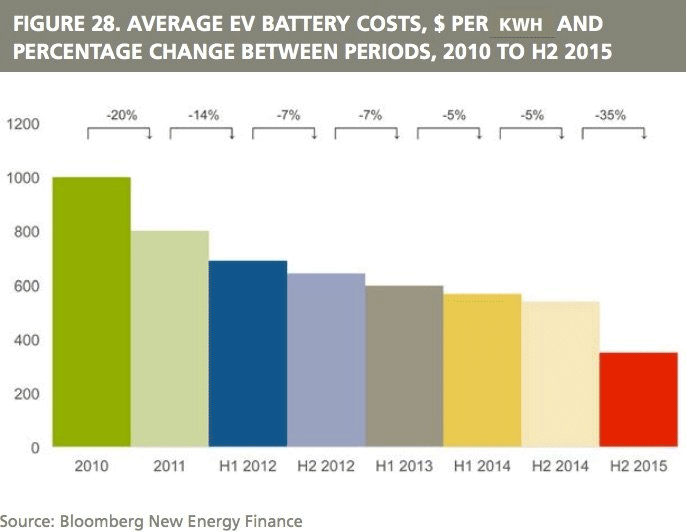 What's it like to own an electric car in Aus?

Here's what one of our Sydney clients had to say about getting an electric car loan for a Nissan Leaf:

Can I buy a second-hand electric car?

There’s already a range of EV’s available on the popular Car Sales website, and with more models due to reach Australia in the next few years, the options will only increase. You can even get car finance to buy an electric car.

Like what you've read and want to find out more? Speak to a car finance broker today about your options by calling 1300 722 210.