Commercial vehicles include all automobiles that are registered and primarily used for business purposes like transporting goods or paying passengers. The range of commercial vehicles is broad and varied, including utes, SUVs, vans, buses, and trucks.

In Australia, however, utes and SUVs largely dominate the commercial vehicle market. In fact, four ute models topped the best-selling cars list last month. This includes the iconic Aussie ute, Holden Colorado, which remains popular despite the demise of the Holden brand in the country. Also on the list are two of Toyota’s famous large SUVs, Land Cruiser and Prado, which are starting to replace minivans and wagons as the standard people-movers.

Here’s a closer look at the utes and large SUVs that have made it to the latest list of best-selling commercial cars:

The nation’s best-selling car is a light-duty workhorse from a Japanese company with an established record of producing reasonably priced, reliable automobiles for many years—Toyota HiLux.

What makes the HiLux special is that it has been in the car scene for generations since the first model was introduced in 1968. Yet, it continues to be the car of choice of many business owners and entrepreneurs. 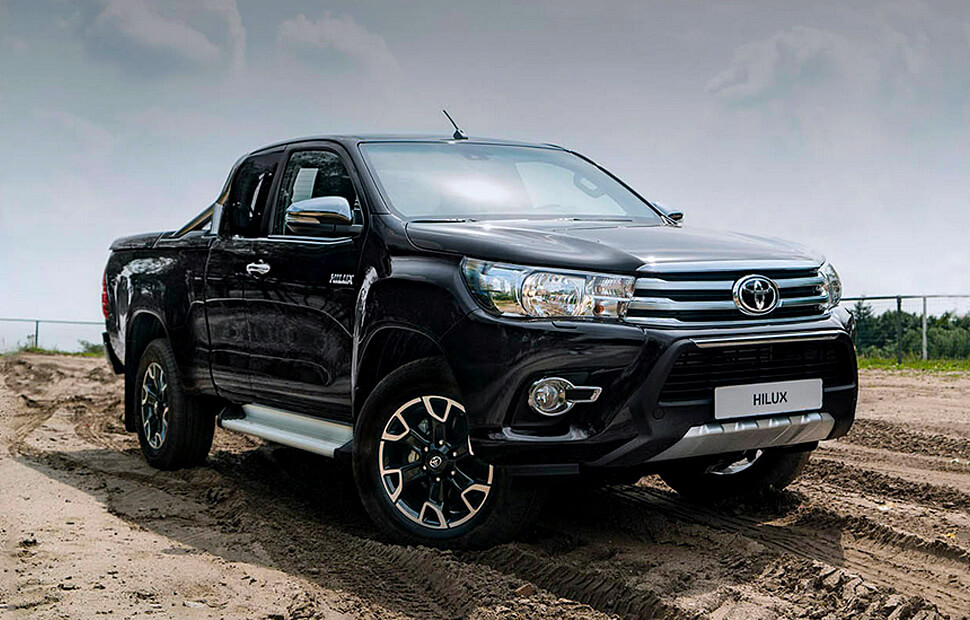 While the sales of HiLux have been affected by the market downturn caused by coronavirus like all other cars, it continues to hold a strong position in the market. Last month, the popular ute sold over 2,300 units, earning the top spot in the top-selling vehicles list. The top-selling record is not just for April alone as it has been consistently beating all other vehicles in sales over the past year.

HiLux has a wide range of trims to offer, from the entry-level single-cab WorkMate to the 4x4 hi-riding automatic dual-cab SR5 to the specialised off-road hardware-bearing Rugged X, which sits at the very top of the range and is a member of the $60K-plus club.

While known for its off-road capability and toughness, the HiLux range doesn't have the best modern infotainment features, like the Apple CarPlay and Android Auto connectivity, which is now a standard in many other pickup brands. If safety is a major concern for you, go for HiLux 2020. This newest HiLux model features new advanced safety gear from its Toyota Safety Sense (TSS) technology. It is also the first ute to score five stars in the Australasian New Car Assessment Program (ANCAP) 2019 criteria.

Another trusted and iconic commercial vehicle that remains popular among Aussies is the Ford Ranger. First introduced in 1983, the American pickup truck has been one of Ford’s most successful workhorses, consistently attracting healthy sales figures despite the growing competition in the ute segment. 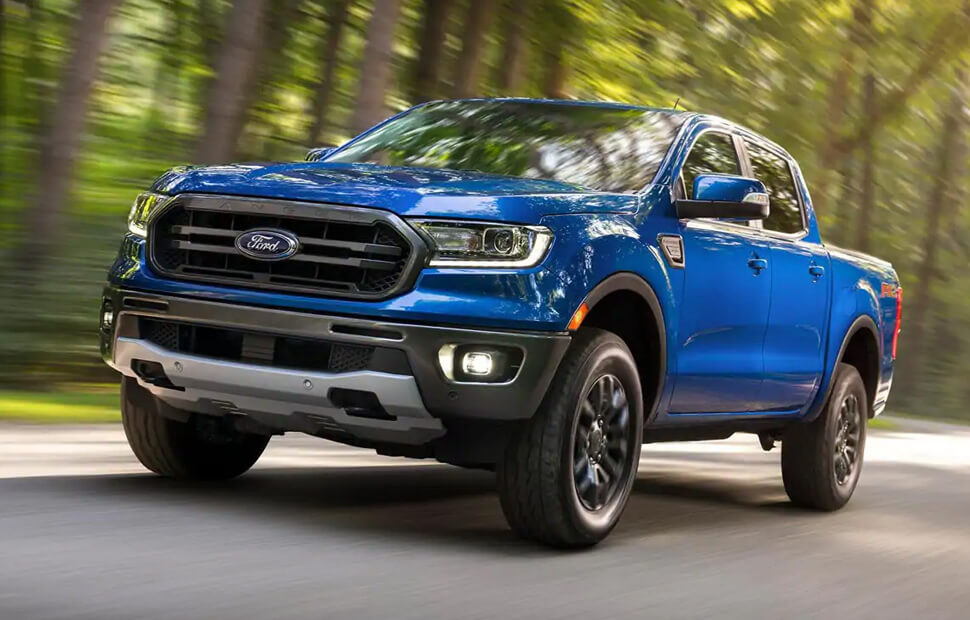 Last month, Ranger sold over 1,500 units, making it the second-best selling ute vehicle behind the ubiquitous Toyota HiLux. Being in a perpetual battle against the Toyota HiLux for sales supremacy and recognition among the car enthusiasts community, the American ute used to be the country’s top-selling vehicle some two years ago. It may not be enjoying the top spot nowadays but who knows what the future holds down the road?

Just like the HiLux, the Ranger has plenty of trims, from the original Single Cab, Double Cab, and SuperCab XL models to the latest additions in the range that include the XLT, WildTrak, and Raptor. The latest models have plenty of exciting features, such as the 800mm water wading, e-Locking Rear Differential and Hill Descent Control, Smart Keyless Entry, SYNC3 integration, and dual 4.2inch Cluster Screens behind the steering wheel. The Ranger XLT, which has made the biggest sales in the range, features a 2.0-litre four-cylinder bi-turbo-diesel engine (157kW/500Nm) and 10-speed auto combo that translate into more power and better running refinement.

Classed as a commercial light pick-up, all Ranger trims come with standard modern infotainment, comfort, and safety features, as well as a five-year, unlimited-kilometre warranty. However, only the 4WD and High-Rider Rangers have a standard locking rear differential, which helps support difficult off-road conditions. All models also have a 230-volt inverter, which allows household electrical equipment to run, except in the XL Single Cab.

The large luxury SUV is a favourite business car of many companies, especially those that are image-conscious. It's no wonder that despite its hefty price tag that starts at around $80,000 for the base model, it has sold over 924 units last month. The impressive sales clearly disproves last year’s rumours that the 200 Series Land Cruiser would be axed because of slowing sales and an ageing architecture. 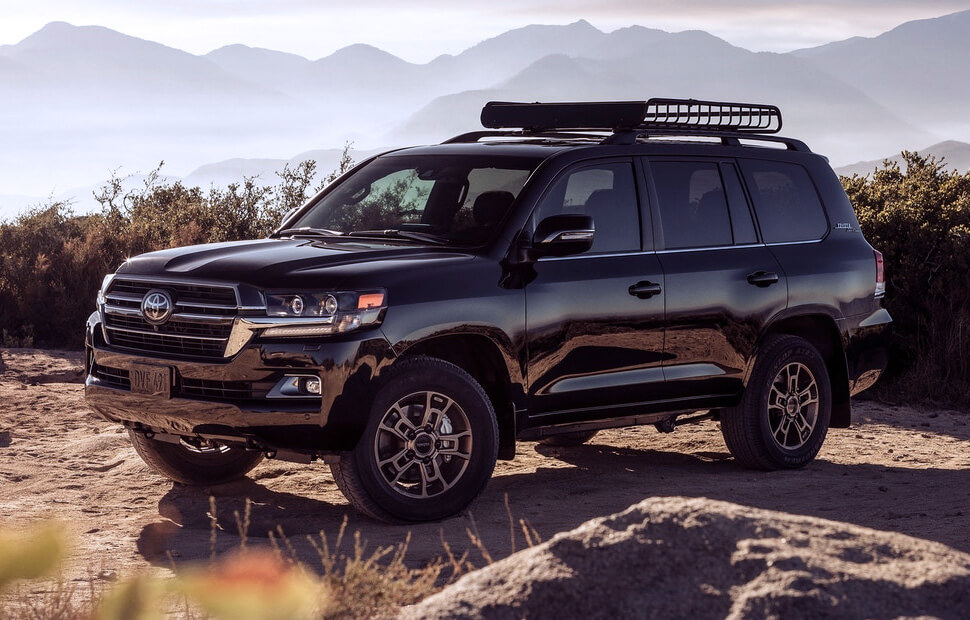 Globally introduced in 2007, the off-road icon continues to be in high demand among individuals and businesses alike because of its spacious cabin, style, performance, reliability, and availability of parts Australia-wide.

Offering plenty of room for up to eight passengers and plenty of grunt and high-tech features, the Land Cruiser 200 line-up consists of the GX, GXL, VX, Sahara, and Sahara Horizon models. All models run on a 4.5L V8 Twin turbo diesel with a 6-speed automatic transmission with dual fuel tanks that achieve a 138L total fuel tank capacity. All models also have a 5-star 2011 ANCAP safety rating. The higher the trim, the more advanced features are introduced. The Sahara Horizon, in particular, introduces a new level of sophistication with its exclusive Horizon badging, unique front grille design with a dark finish, black interior with chrome accents with premium black leather accented seats, door trims, and steering wheel.

Toyota has dropped the petrol model from the Land Cruiser 200 line-up due to poor sales. Meanwhile, the pricing level has seen a price hike for the 2020 model year although there is no additional equipment added across most models. If you want to purchase a Land Cruiser 200, better check the pricing trend because Toyota adjusts the pricing of its vehicles from time to time according to economic and business conditions.

This large SUV-type wagon has sold over 947 units last month. The vehicle is popular among corporate businesses as its spacious cabin can comfortably accommodate up to seven passengers, perfect for business trips even to off-road trails. It offers several models to choose from, including the GX, GXL, VX and Kakadu. All have 4WD configuration and a 2.8L Turbo Diesel engine, which provides plenty of grunt. 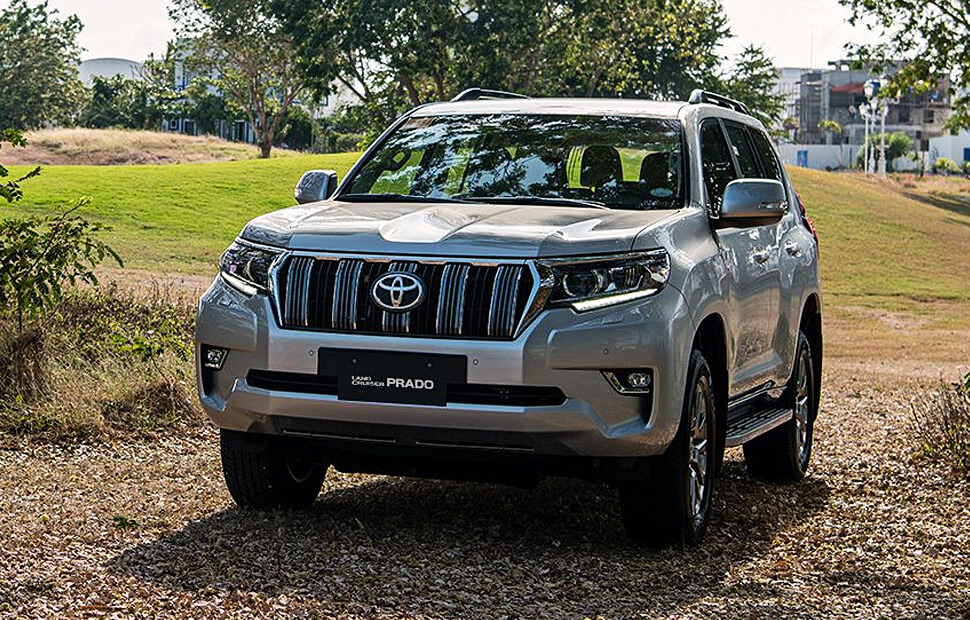 With a base price that starts at around $63,690, the Prado is not the most affordable large SUV option in the market. However, it remains the choice of many because of its engine specification and unique safety and other features. This includes various safety and driving features from the Toyota Safety Sense suite of advanced technologies. It is also installed with the Kinetic Dynamic Suspension System and Adaptive Variable Suspension for a comfortable ride. The top-spec trim Kakadu comes with a Multi-Terrain Select for off-road expeditions.

Toyota Prado has a proven reliability and capability record. It offers a comfortable ride on road, which is impressive for a 4WD car, as well as excellent off-road performance. However, it has a modest overtaking performance with the 2.8-litre turbo diesel engine. It can also tow less than other big wagon models. The Prado Kakadu Horizon special edition, which was launched last March, features a number of exterior styling enhancements. The top-of-the-range model commands a base price of $89,590.

The sales for the iconic Australian ute has surged after the demise of the Holden brand in the country. The car sold over 2,400 units in March and 800 in April. The decrease in sales, which was also observed in other car brands, may have been attributed to the coronavirus crisis. 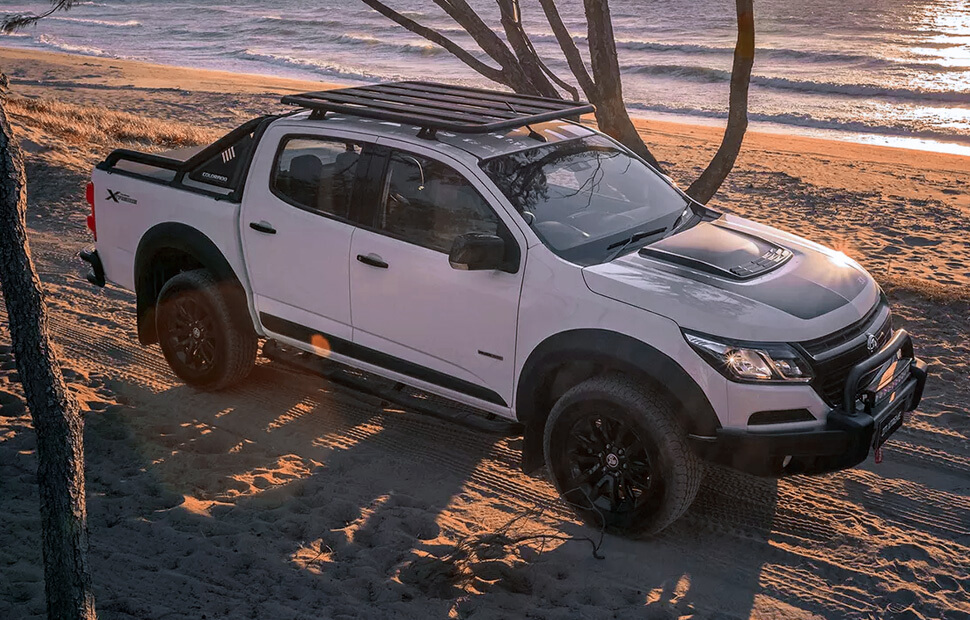 Currently available from a base price of $31,690, Holden Colorado is a practical choice for many entrepreneurs because of its performance. It can tow up to 3.5 tonnes and offers up to 147kW of power from its 2.8L diesel engine, which is good enough for hard work and rough roads. The car is also available in various trims, including single cab, crew cab, and space cab; 4×2 or 4×4 drivetrain; and two or four-seater models.

You might be better off with the Holden Colorado 2019 model than go for the more expensive 2020 model. The range has been updated for 2020 yet it looks identical to the 2019 model. The cabin tech is also the same. What changed are the additional standard inclusions on some models. The once special-edition LSX is also now a permanent member of the range with a base price of $46,990.

If you need specific accessories, you can choose from a variety of accessory packs to fit your lifestyle—Tradie Pack, Farmer Pack, Black Pack, Rig Pack, and Xtreme Pack. Each pack comes with a voucher that reduces the total cost of your purchase.

The fourth ute on the list of the ten best-selling commercial vehicles in Australia is the D-MAX, which is known for its affordability and reliability. With a base price of around $28,600 for the entry-level 4x2 single cab-chassis SX model, it’s understandable that the tough-looking Japanese workhorse is in-demand, selling over 760 units last month. 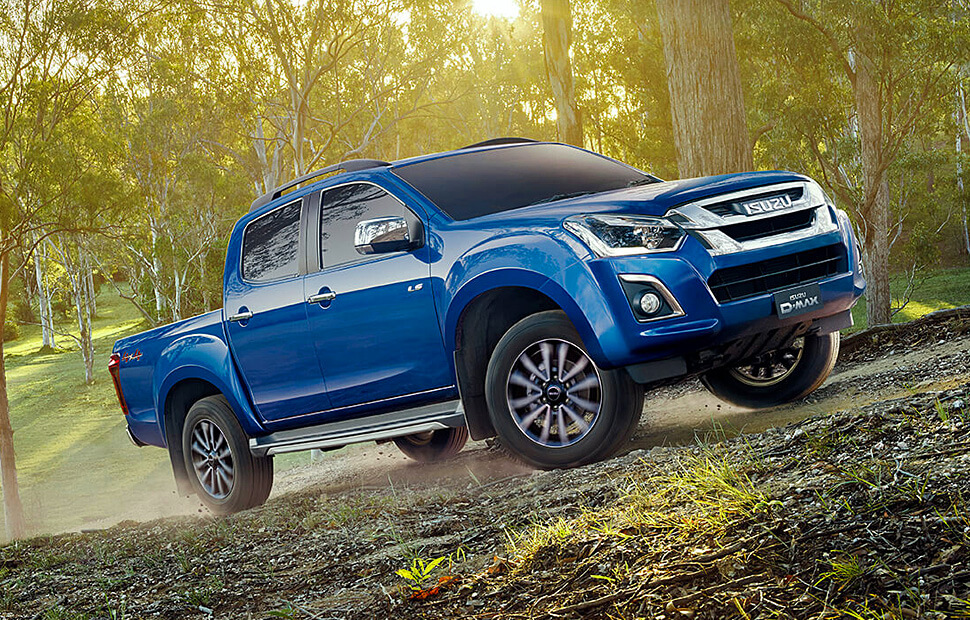 Launched in 2002, the D-MAX is divided primarily into the SX and LS range with Crew Cab, Space Cab and Single Cab varieties; and 6-speed automatic or manual transmission option. All trims run on a 3.0L diesel engine with a turbocharger upgrade available on select models. The high-spec models have a 3.5-tonne towing capacity, leather interior, and infotainment unit.

The third-generation Isuzu D-MAX or the 2020 model will be available in Australia around the middle of this year. The latest model will come with a 3.0-litre turbo-diesel engine, improved safety systems and infotainment technology, and new interior and exterior designs. The new exterior design is said to be more aerodynamic. However, there is no confirmation yet for the new pricing. If you’re planning to buy the latest model, you would have to wait for its mid-year launch date.

Seeing which cars are highly in-demand will give you a great idea of the best car to buy for business purposes. At the end of the day, however, your ideal commercial vehicle will depend on your specific business needs, financial situation, and budget.

If your business operation involves a lot of hauling and towing but rarely transports staff, it may be best to buy a ute. If, on the other hand, you and your staff need to attend a lot of business events outside the office, you would need vehicles that can transport many passengers, like a large SUV or a wagon. Additionally, if your business sells an image, you may need to invest in an expensive yet prestige-building luxury vehicle.

Regardless of which vehicle you choose to buy, it is best to do your research before stepping into a dealership or negotiating with a lender for a car loan. It's not just the price of the car that should affect your buying decision. You should also consider the car's performance, safety, technology, fuel economy, and extras as they affect the total cost of car ownership. Comparing car prices and even car loan rates will help you make a good deal.